The Golden Hill Community Garden (GHCG) is on a site run by the Horfield & District Allotment Association (H&DAA) although the GHCG itself is a Community Interest Company and has its own management and accounts. For details of how to join in follow the link to the Community Garden’s own website. 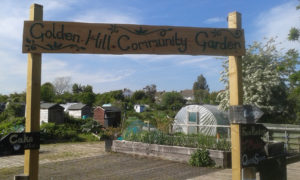 The story of how the Community Garden started and how it is developed is told below “in the words of those that were there”:

The seed for the garden was sown in 2006 when the H&DAA Committee Chair and Vice Chair visited Thingwalls Park allotment site, where the council had built a couple of raised beds accessible to wheelchair users. Several years later, that seed was germinated when a plotholder, Clare, who at that time was suffering her own mobility problems, discussed the possibility of H&DAA doing something along the same lines in an area of the Golden Hill site which was heavily waterlogged and unworkable. With the backing of the allotments committee, and the city council, a working group was formed which agreed to create a garden that would be accessible for able bodied, less able and wheelchair users. A plan was put together to obtain Big Food Lottery funding, which was duly successful. We advertised for a project coordinator, had more than forty applications which we reduced to a short list of six and chose Lucy, wisely as it turned out!

Slaloming Sam the Tractor man was the first of the contractors to appear on the scene in the very wet November of 2011. He was also the first to leave! Adept though he was at wielding his bucket in the pursuit of site clearing, seeing him speeding round the edge of the pond, before there was a proper path, in the dark and the mud, did not fill me with enthusiasm, and despite pointing out to him the potential health and safety implications, he was keen to keep going .Not wanting to be crushed by a tractor, or to jump in the pond to drag him out, I had to tell the contractor’s supervisor not to allow him back, the first of many less than humorous conversations we were to have over the next couple of months.

Throughout that (very) cold and (very) wet winter, the construction of the garden proceeded. Sadly,not apace, but in fits and starts. Lucy had already been appointed, and the two of us spent most of the time alternately tearing our hair out (me, no comments please), or being far too cheerful (her). The Bristol Trust for Community Volunteers were laying the path for us round the edible forest and past the polytunnels, and it seemed that every time they turned up, it rained, but nothing daunted, they persevered and did a fantastic job.

Slowly, but not so surely, the work got done. We had to offer advice on how many screws should be in a decking plank, explain what logistics meant, and supply power for their tools.  We had to resort to our trusted infrastructure guru, Kieran, to rescue us on several occasions. Finally, after many and varied problems, we decided to send them away so that we could finish the work ourselves in time for our planned opening in February 2012.

We are up and running. At the moment we are operating with one polytunnel and the sleeper beds, waiting to see what response we would get from volunteers. Phenomenal was the answer. From the outset a great mix of people turned up, and it soon became apparent that we had provided a welcoming space for many in the community, both locally and further afield, something that is evidenced by the support we get to this day. A flurry of activity then followed, as first year sowing and planting commenced, with many volunteers having to start from horticultural scratch, but how well they coped.

Simultaneously, there was much work needed to be done on the infrastructure of the site, so there was plenty to do for everyone, whatever their abilities. We decided that we needed to raise our profile in the community, and thought that a Spring Fair would be perfect to do just that. That turned out to be a shrewd move, indeed so successful was it that a harvest fair followed in September, and in subsequent years we have done the same with great support from the community, topping 700 visitors on several occasions, with a commensurate much needed boost to our funds. All of which is only possible because of the unfailing support of the Garden volunteers, allotment volunteers, performance artists  and a good deal of networking and cajoling from Lucy. Our first year ended with a carols and bonfire event, and everyone was looking forward to what the New Year would bring, and wondering why there was a big hole filling with water next to the polytunnel.

The answer is that it was going to become a well, from where we would pump water up to the top of the site to a holding tank, and then feed by gravity back through our existing pipework to the taps and troughs. Should be fairly straightforward. And so some months later, with Kieran’s infrastructure knowhow and Liam’s solar knowhow, the Tower of Power was installed, with ,once we had got it started, a solar powered pump ticking away. As it turned out hydrokinetics was not our specialised subject.

2013 turned out to be one of the wettest summers for a long time, especially it seemed on Wednesdays, which was of course volunteers’ day. However, in spite of the weather, plenty of progress was made. The second polytunnel went up, and in spite of paddling around ankle deep in water in the first polytunnel, plenty of planting and growing took place, and we took advantage of the new raised beds we had built. We also got involved with building our soon to be famous Tetrapac wall for some protection from the wind in the pergola when we were sitting out there.  More volunteers turned up, and we were especially pleased that we could provide a facility which could be used by such a variety of people who were able to derive some pleasure and benefit from the Garden. We also started winning awards, which was nice!

This year we started welcoming children into the garden with our Golden Adventure Days and now on Tuesdays in the holidays the garden is full of whooping children making rafts, bow and arrows, facepainting, climbing trees and generally being silly, getting covered in mud and helping raise funds for the garden.

After 2013 and the rain, we had decided that we should surround the Garden with French drains, to divert the water away to the overflow outlet in the corner of the site. Result!! We didn’t need to spend our life in wellies any more. Which was just as well, because over winter, mutterings had been heard about building something a bit more substantial than the Tetrapac wall to protect us from the elements. Straw house it is then ‘cos we all know about how to do that….. or at least we know someone who does. Plans were made, foundations were laid, (well, tyres packed with clay and stone), and all that was needed was a load of people to move our 150 straw bales from the disparate areas of the site where they had been stored.

No idea where they came from, but apart from our own volunteers, on the weekend we had set aside for the big build, straw house aficianados turned up from all over the area, and it seemed that in no time at all, something resembling a building started to take shape.

But then we were on our own, with a huge amount of work, chiefly the lime plaster and the lime wash, still to be done. I wondered whether we had the resources to finish the work, but I hadn’t reckoned with the huge commitment that Bob, who by now was my right hand and left hand man, and who became an expert at mixing and applying the plaster, would make. With Maria becoming a dab hand at applying the lime wash ,and many others getting involved, the work was done before the first frosts. I am constantly awestruck by the effort that volunteers are prepared to make, and how they buy in to the ethos of the Garden.

We started our popular Golden Buds toddler group this year and welcomed tens of tods and their grown ups into the garden for pond dipping, digging, singing, watering, stories and munching on snacks fresh from the garden. Hopefully, as they grow up they will be the allotmenteers of the next generation, particularly since many of their parents are now plotholders themselves.

Our original funding from the Big Food Lottery fund had now ended, so we are on our own in having to finance the Garden. Our fantastic Friends of the Garden , who contribute each month by standing order, give us the certainty of a regular income, and we are fortunate that Lucy is excellent at sourcing and obtaining funding, or knowing somebody who is.

The Spring Fair saw the official opening of the Balehouse, complete with a rendition of Balehouse Rock – thanks Pip. We now have power diverted to the Balehouse from the solar panels, so more opportunities open up for it’s use.

After the continued success of all our childrens’ days we started an afterschool club picking up children from Bishop Rd School. We run this year round in sun, rain or snow!  After a conversation with a parent we realised we could do more for local families with a child/ren with a special educational needs or disability.  With funding we launched our Inclusive Family Adventure days for whole families to come and enjoy the garden with fun/wild/sensory activities tailored for everyone as well as a delicious shared meal and pizzas prepared together.  These days provide a rare place where local parents of children with SEND can bring their whole family and enjoy an outdoor space together as well as meeting other local parents. Based on that success we started a Sunday club funded by Quartet which is just finishing its first year.  It’s had a knock on affect in the garden keeping accessibility for everyone as a top priority whether it’s having a quiet space at our community events or ensuring all our main path are always wheelchair accessible.

We are now (2018) starting our seventh year. Our amazing volunteers attend in all weathers and thanks to them the garden thrives. Because so many of them have been with us for a long time, our various community events run like clockwork as they know what’s required. As well as the enduring success of the fairs, weather permitting, the last couple of years has seen an extraordinary increase in the popularity of Bonfire night, when we have had to turn people away, and our Christmas Wreath making session, which seems to have become a Christmas tradition for many in the community, who return each year.

The support we get from so many diverse members of the community confirms to us that we definitely fulfil a need. Many of you will know that I am, to put it mildly, something of a cynic. True, but not when it comes to people. The benefits and the worth of the garden are there for all to see in those who come here. Whatever need they perceive to satisfy from their use of the garden, seems to be met, judging from how often they come. There can be no denying that the garden is and has been a major influence in the wellbeing gained by many from visiting it, and we hope it continues to fill that need for many years to come.

Information about our Sites