One of the Centenary Project initiatives was a proposal to collect and process surplus apples, fruit which would otherwise have rotted on the ground. This initiative was led by Pete, who  organised the purchase of a piece of equipment which doubles up as an apple scratter and an apple press.

On the designated Apple Day in September 2017, a band of hardy volunteers turned up at the Golden Hill site. The day started with some people patrolling the site to gather up fallen apples into wheelbarrows. Then another group set about washing, sorting, and cutting the apples into smaller pieces. 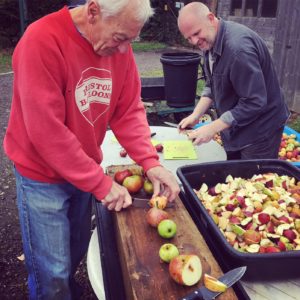 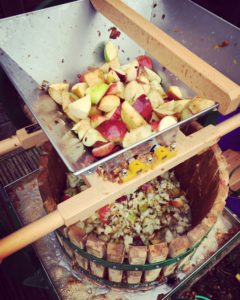 The next stage involved the scratter, which was loaded up with the apples pieces and then the handle turned to break down the apples into a pulp. Once the collecting bucket was full, the scratter was cleverly transformed into an apple  press and the pulp was then squeezed through the press to produce apple juice which was collected in buckets and then into containers.

It was a particularly heavy apple crop. There were a number of wheelbarrows on the go at any one time and the apples kept on coming!  Most of the resulting apple juice was quickly consumed – and the rest found its way into barrels and produced our first batch of Golden Hill cider.  We hope this will become an annual event and will be a legacy of the 100th anniversary project. 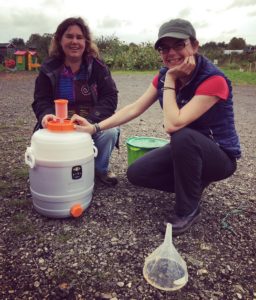