A recipe from Stephen Markwick 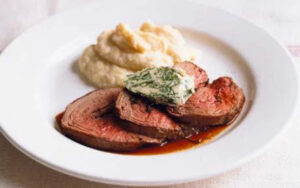 Venison has featured regularly in Stephen’s menus over the years. He used to source his venison from the surrounding countryside, specifically the Mendips, using his regular supplier. Wild roe deer is his preference and they are available throughout the year. As they tend to be smaller they don’t need much cooking and they never dry out. Hanging for a week or two enhances the flavour considerably.
In this recipe loin is used because it is flavoursome and very easy to prepare and cook. It was often on the menu around Christmas time, with a few cranberries thrown in as a seasonal twist.

for the celeriac and potato mash

Method
The venison component of this dish cooks really quickly so get your sauce and vegetables under way before you sear and finish it off.

Make sure all components are hot, Carve the venison fairly thinly, arrange of the plate with the vegetables and spoon the sauce over the meat.