Was that a UFO flying over Golden Hill? No it’s a drone camera filming the allotments for a new feature to be broadcast  on the BBC later this year. 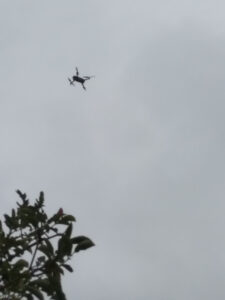 The BBC cameras have been in Golden HIll filming for future editions of the Countryfile programme. There is to be a new initiative to plant trees nationwide and to encourage the development of green spaces, especially in urban areas. To help illustrate this, the cameras have been out filming in many areas of our Golden Hill allotments.

For the close-up shots the Community Garden polytunnels have been filmed, showing off the great variety  of tomatoes and other plants that Lucy, Pete and the volunteers have managed to grow there this year.  Many other plots were also picked out for the colourful flowers or vegetables growing. 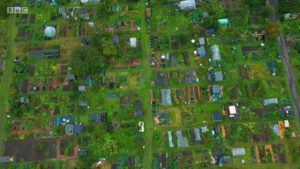 A remotely-operated drone camera was then sent into the sky above Golden HIll to show the overall landscape of the site, penned in by houses on most sides and by the prison on one side. This shows how, even in such a densely-built up area as Bishopston, there can be huge scope for growing plants, trees, vegetables and flowers. This aerial shot was shown on the BBC Countryfile programme on Nov 29th. 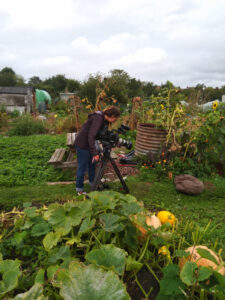 It is expected that the BBC team will be paying further visits to our site later in the year to document changes in the seasons.