In summer 2020, on the Golden HIll site, the badger has been around again attacking plotholders’ sweetcorn. However, some allotmenteers have been fighting back by using various techniques to counter the badger’s love for sweetcorn.

The photos below show 3 different ways in which blocks of sweetcorn  have been protected. Two of these methods seem to have worked as none of the sweetcorn cobs in these protected areas have been damaged. One method partially worked and some crop was picked before the badger wreaked havoc. On the other hand, in the final photo below,  we show what happens if the badger gets through and destroys the whole crop in one night. 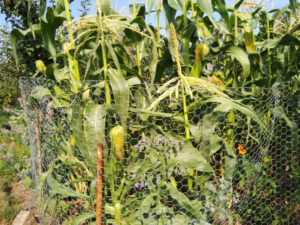 In this example the plotholder has surrounded the block of sweetcorn on all sides by 3 foot high chicken wire which is secured in place with stout metal stakes. This acts as a barrier that the badger finds difficult to cross. We also understood that male urine may have been placed at strategic points around the fencing as the smell is meant to deter badgers from venturing further.
Result: no badger damage to sweetcorn crop. 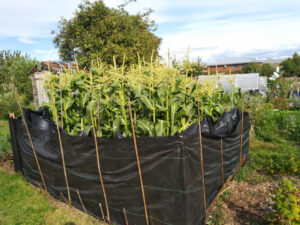 Here the plotholder has placed a double layer of thick black plastic sheeting around the sweetcorn  at a height of 3 foot, secured with wooden sticks. The theory behind this is that the badger cannot smell the sweetcorn through the plastic barrier, and this prevents him from finding the sweetcorn, as it is the badger’s sense of smell that guides him to the sweetcorn.
While this method kept out the badger for most of the early crop, he appeared to have discovered a way in through the barrier to the sweetcorn towards the end of the ripening period and a number of cobs were destroyed 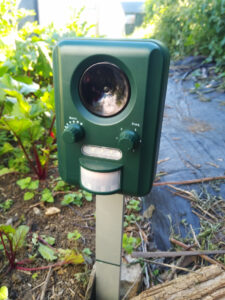 This device is placed next to the block of sweetcorn and detects movement of animals within an 8 metre range. When the device senses that an animal is near it emits a high pitched sound which only animals can hear. In addition it flashes LED lights at the same time.  This combination of sound and light disturbs any animal within range and deters them from venturing any further.
Result: no badger damage to sweetcorn crop. 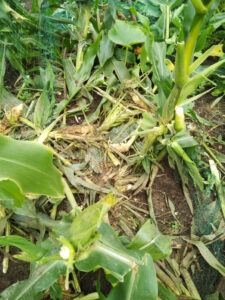 While all 3 of the above solutions gave full or partial success, this photo shows what happens  when sweetcorn is not protected from badger damage.  In one night a badger ate all the ripe or nearly ripe sweetcorn cobs and completely flattened the sweetcorn plants. There have been a number of reports of similar damage this year including the Golden Hill Community Garden, with Lucy and Pete reporting that a large number of their sweetcorn were attacked and eaten by the badger.

The conclusion we can draw from this year’s experiments is that some protection against badger damage to sweetcorn crops can be given by physical barriers and/or devices that detect movement and emit noise/light to distract and frighten the badger.
No protection spells sweetcorn disaster!

If you want more details of the above solutions contact us on info@horfieldanddistrictallotments.co.uk