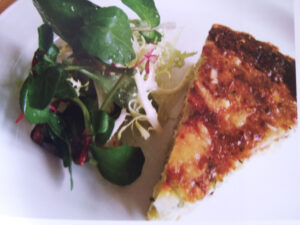 Stephen has always had tarts on the menus at his restaurants, but this is a particular favourite. It contains a fair amount of cream, but that’s what makes it taste so good – he’s sorry but you can’t do a slimline version!
A general point about tarts – they’re much better made deep than shallow; you seem to get more depth of flavour and texture.

Serves 8 as a starter, 6 for a main course

For the tart pastry case

Method
You will need a deep flan tin or ring of 20cm (8 in) size and a baking sheet.
(Don’t use pottery or china quiche dishes as they don’t transmit the heat well.)

For the pastry case

You’re left with a fair number of egg whites from this recipe. Stephen recommends using them to make meringues!