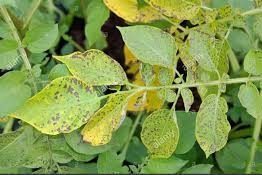 What is tomato and potato blight?

Potato and tomato blight is a disease caused by a fungus-like organism that spreads rapidly in the foliage and tubers or fruit of potatoes and tomatoes in wet weather, causing collapse and decay.

It is a serious disease for potatoes and outdoor tomatoes, but not as common on tomatoes grown in greenhouses.

Blight is specific to tomatoes, potatoes and some ornamental relatives of these two crops. Cases have been recorded on ornamental Solanum species (e.g. S. laciniatum), and also on Petunia.

Blight in potatoes is characterised by a rapidly spreading, watery rot of leaves which soon collapse, shrivel and turn brown. Affected tubers have a reddish-brown decay below the skin, firm at first but soon deveoping minto a soft rot.
Ripening tomatoes show brown patches when attacked by blight.

You may see the following symptoms:

The genetic population of the fungus is ever changing and new findings have shown that one dominant new strain seems to have overcome major gene resistance.  Some old favourites are very susceptible, eg ‘Arran Pilot’, ‘King Edward’, ‘Majestic’, ‘Sharpe’s Express’.

The AHDB have a website where you can search for different potato varieties and see what resistance they have to pests and diseases including blight.
Click here for the Potato Variety Database.

Tomatoes are generally very susceptible, but the varieties ‘Defiant’, ‘Crimson Crush’, ‘Ferline’, ‘Legend’ and ‘Fantasio’  show varying resistance to blight. Even these varieties, however, will eventually succumb in wet, warm weather. It is probably best not to rely on host resistance for blight control in tomatoes.

There are currently no fungicides available for use by gardeners against blight on potatoes or tomatoes.

The late blight pathogen is a microscopic, fungus-like organism whose sporangia (spore-bearing structures) easily break away from infected foliage and may be wind-blown for long distances. The actual infective spores are released from the sporangia into water and need to swim in a water film before settling on the plant surface and penetrating into leaf tissues; this is why the disease is so serious in wet summers. The pathogen then spreads rapidly, killing the cells. Under humid conditions, stalks bearing sporangia grow from freshly killed tissues and the disease can spread rapidly through the crop.

The pathogen overwinters in rotten potatoes left in the ground or by the sides of fields. However, the great majority of infections in gardens arise from wind-blown sporangia originating in other gardens, allotments and commercial crops. In the UK, outbreaks may occur from June onwards, usually earliest in the South West.

The presence of new strains in the UK means that the pathogen now has the potential to produce resting spores (oospores) in the affected plant tissues. The oospores are released from the rotting tissues to contaminate the soil. These resting spores have yet to be found in the UK, however, and little is currently known about their survival and their potential as a source of the disease. The investigations into oospores are continuing and more information may be available in a few years.

Late attacks of blight defoliate potato crops, but if the disease arrives after the tubers are set and they are harvested before they become infected, little is lost. However early attacks can also be devastating and blight is the most important commercial disease of potatoes. Outdoor tomatoes are at high risk of infection if the weather is suitable. The disease is less of a problem under glass as the spores have to find their way into the glasshouse through doors and vents. If, however, blight establishes in a glasshouse the high humidity inside usually leads to very rapid development of symptoms.