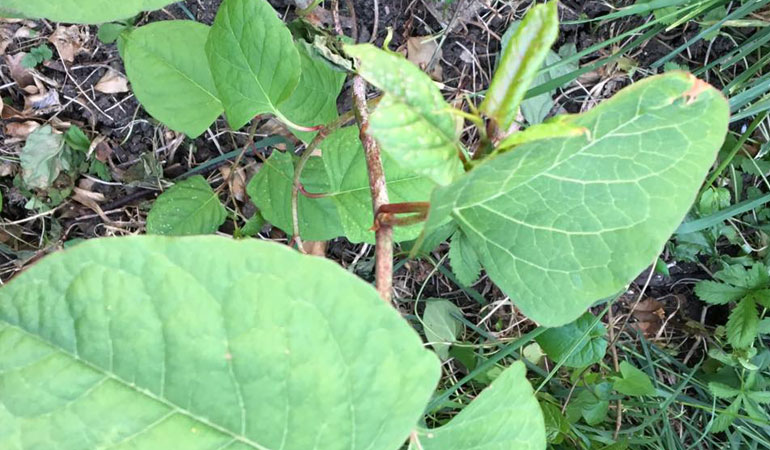 The presence of Japanese knotweed is not just an inconvenience but, is also a threat. These plants with their root systems can take over our gardens, our allotments and even affect potential building sites.

The back end of my neighbour’s garden was taken over by Japanese Knotweed a couple of years ago. I made him aware of the problem and, although he had not been aware of it before, he has gone to a lot of trouble and expense to try to research and eradicate this most invasive problem. It had come into his garden from a neighbouring property which was let and was therefore somewhat uncared-for. His efforts have saved me from this pest but it gives him a continuing headache.

Some of our plot-holders have not been so lucky and have been faced with the difficulty of the eradication and disposal of this weed for some time.

Knotweed is an invasive introduced plant that colonises waterways and woodlands, and pushes out native wildlife. It gets to be very tall, forms dense stands, and is an impressive sight. Originally a garden plant, it now gets everywhere and is a nuisance particularly as its strong roots can break through concrete and damage buildings. It’s particularly problematic in the West Country and Wales.

Knotweed and the Law

Like ragwort, it’s not actually illegal to have knotweed on your land. But it’s not a good idea. In the UK there are two main pieces of legislation that cover Japanese Knotweed. These are:

The Wildlife and Countryside Act 1981 – Japanese Knotweed is in Schedule 9 and Section 14 of the Act. It is an offence to actively plant or otherwise cause the species to grow in the wild. But it’s not actually illegal to have it on your land, nor is there any specific law against allowing it to spread, although doing so could be a nuisance.

The Environmental Protection Act 1990. – Japanese Knotweed is classed as ‘controlled waste’ and as such must be disposed of safely at a licensed landfill site according to the Environmental Protection Act (Duty of Care) Regulations 1991. Soil containing knotweed roots can be regarded as contaminated and, if taken off a site, must be disposed of at a suitably licensed landfill site and buried to a depth of at least 5 m.

If you have a neighbour who has knotweed and it is spreading onto your land, it would be a very good idea to take action before it gets near your buildings. Start with friendly discussions, but if that goes nowhere, it might be time to consult your buildings insurance company (some will act for you in such matters) or a solicitor.

What to do About Knotweed

There’s only really one thing to do: poison it. No other method really works, and anything involving digging or cutting has such a high risk of spreading the plant it’s probably not worth it. A bit of plant the size of a postage stamp can sprout into a whole clump within a single growing season. Application of glyphosate (Round-up) can control it if you are lucky, but for anything more than a few stems you really need to get qualified help in to do it properly. Unfortunately it is a hard plant to poison, and often resists applications effectively. Commercial herbicides are stronger than those bought over the counter and a trained operative will know the best way to get at this particularly difficult plant.