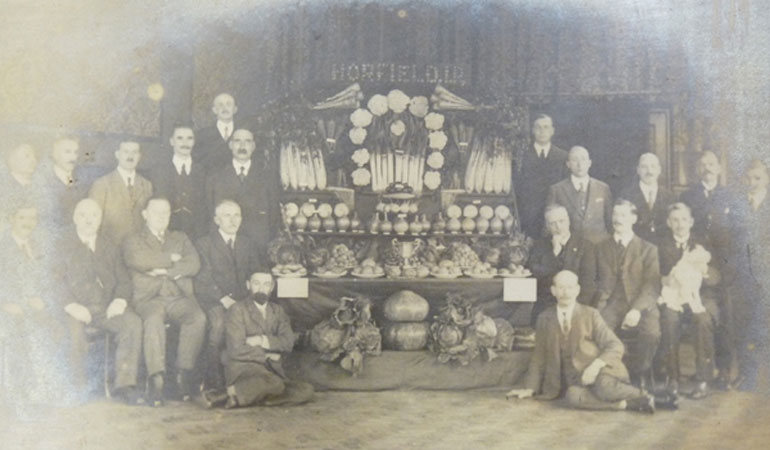 In August 1930 H&DAA purchased Oakley Hall in Oak Road, Bishopston for £620, and in 1931 it became the registered office of the Association. The Hall was officially opened by the Lord Mayor of Bristol on 7th February 1931. Local maps show that the building was originally built around 1900 as a Wesleyan Mission Room and was used for Christian services and meetings.

The Hall comprised two main rooms downstairs, one of which was used to store and sell seeds and other gardening items; the other was an office where people went to pay their rent. On the first floor was a large hall which occupied most of the upper floor. This was used for large meetings and also features in some photos from the 1920s when the H&DAA vegetable displays were put together.

Oakley Hall was used by the Association as a Trading Shop for seeds and other items for sale to members, for committee meetings and for AGMs. Many older plotholders have stories of going to the Hall to pay their rent money and to buy seeds from the Trading Secretary.

In 1934 the National Painters Society leased rooms from H&DAA, presumably for their members to work and display their paintings. Another arrangement was made in 1940 with a church to rent the Hall for two evening sessions during the week and for 3 separate services on Sunday. This was to carry on through the wartime period. Rooms were also let to the British Legion, the Labour Party, the Liberals and others, so that a steady rental income was received.

After the war, the Hall continued to be used for trading of seed potatoes, packets of seeds, canes, fertiliser and other ancillary items. People who went there to pay the rent or buy seeds remember its distinctive smell which was probably a mix of fertiliser, weedkiller and the gas fire that was always on. The original trading secretary was Mr W.E. “Ted” Hill and the last was John Cook. However by the early 1990s no-one wanted to take on the job of running the store.

By 1993, income from the Hall had declined such that in the previous 5 years the overall loss on the Hall averaged over £500 per year. H&DAA members were surveyed on what they wanted to do with Oakley Hall and the Committee subsequently decided that the cost of upkeep of the Hall outweighed the value it was providing to H&DAA members.

A survey of the Oakley Hall was commissioned by H&DAA which reported that the Hall was in an extremely poor state of repair. The Committee decided to sell the Hall and gave 3 months notice to the Brethren who were still holding religious meetings there. Shortly after this, the hall was put up for sale. The sale raised £51,000 which went into the H&DAA reserves. Much of this was used to put secure fencing and gates, good haulingways and water taps on the fields. This was done in conjunction with Bristol City Council, although H&DAA got little of the money back from the Council.

After its sale, the Hall was converted into two residential properties built on the site, 73 and 75 Oak Road.