Changes are inevitable in life and allotments are no different. During the 1980s  tenant numbers fell away and, if occupancy had dropped to below 75%, there was a  real danger that H&DAA might not be able to carry on and the allotment sites would be taken back into the council fold. However, it was during the 1990s that the fortunes of allotments in general and H&DAA in particular took a turn for the better. Applications for plots gradually increased as people’s enthusiasm for growing their own food increased.

In the last two decades of the 20th Century H&DAA worked hard to keep up with social changes which affected the allotments. This is evident in  initiatives such as:

Whilst the Golden Hill site boundaries have remained the same since 1967, there have been dramatic changes made to the area inside. The current layout has stone based haulingways and paths, but until the late 80s, there were just two grass paths, one going from the prison gate straight to the top of Baptist, and another one winding round St Agnes to the gate by the orchard. As a result, many of the plots on the south side by Fenton Rd were virtually inaccessible, and plotholders gave up.

Fortunately, in 1993, it was decided that we should sell our headquarters at Oak Rd, and some of the money raised was spent on improving the site. Security was seen as a particular issue, so our fencing and gates were upgraded and padlocks fitted. We also felt that more taps and troughs should be provided, so there was a major upgrade to the infrastructure, first with the water, and then with the existing haulingways.

As we moved through the 90s, money started to become available from the council, through the sale of allotment land in other parts of the city. The H&DAA committee used our allocation to improve accessibility in St Agnes, and also to lay a haulingway and improved water availability at Birchall field, as well as some restorative building work and infrastructure improvement at Wessex Avenue. In St Agnes, two new paths were laid to open up the field so that plots would be easier to access. Additionally, half a dozen overgrown plots were strimmed, ploughed and covered with plastic, then left for 2/3 years so that all the perennial weeds would be killed, before we were able to let them. Subsequently, with some council funding and also our own resources, many works have been carried out on all our sites to maintain the standards we have set ourselves.. 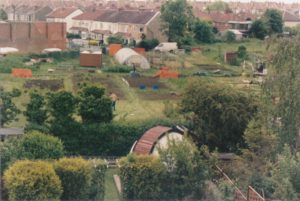 Other developments occurred on the Birchall Road site in the early 1990s when Wessex Water decided they needed to install a large water retention tank on the allotments to help prevent flooding from the stream which runs parallel to Cranbrook Road. This meant a considerable disruption to the Birchall Road site plotholders where a number of sites were out of action for up to two years while the construction work went on. After the work was completed the new tanks were covered over and plots returned to cultivation.

Into the 21st century much progress continues to be made.

In 2002, the council approached the Association with a proposal that we could become self-managed. At that time we were effectively acting as rent collectors for the council, sending them all our rental income, and then requesting to get some back from them for maintenance etc.  H&DAA were given the option of either staying on the old lease arrangement where the Council still had responsibility for site repairs or going to a nominal “peppercorn” rent for a 15 year lease where all the management and repairs of the sites was the responsibility of H&DAA, but the Associaition retained the rental revenue.  H&DAA members were asked their opinion and many expressed scepticism over the Council’s commitment to allotments. Finally, the committee agreed to take up the Council’s  offer. The principal condition of the lease is that the site must be returned to the Council in the same or improved condition, if the lease is ever ended. Photos taken at the time contain a record of this..

At the Golden Hill site there used to be a dew pond at the bottom of the site near the prison lane, which was lost when the site’s drainage was altered. However, in 2003 a  large pond was constructed, partly to act as a sump to collect the water pouring down the slope which had left the plots at the bottom flooded and unworkable, and partly as a deterrent to the Prison, who had been asking if our unused land could be made into a car park for their use.

Soon after the pond was constructed, it became a wildlife haven for fish, newts and the whole range of pond life, including whirligig beetles and caddis fly larvae. Frogs and toads arrive in their hundreds at the end of February for their breeding season. In the summer the dragonflies visit, and all the year round the birds can be seen feeding from the plants. It also provides hours of fun for the toddlers, and quite a few adults.

Before mains water was installed in 1953, water had been drawn from a well fed by a spring in the south west corner of St Agnes field, still evident now after heavy rain. Now water from the well in the Community Garden provides water for all of the Golden Hill site, except for Longs, pumped using solar power to transport it to two 5000 litre tanks sited at the top of Baptist, from where it is fed by gravity back down to the taps and troughs.

In 2018 the H&DAA is thriving. For the last 50 years or so, the allotment land that the Association has managed has largely remained the same. The total estate comprises approximately 20 acres across 3 sites:

Although there is little prospect of increasing its allotment land, the Association should be able to retain the current estate as plot occupancy remains high and interest is allotments is buoyant. It seems a fitting tribute to those men of 100 years ago from Bishopston and Horfield, whose hard work and endeavour set up the H&DAA, obtained land to use for allotments and managed its use for the members that this Association is carrying on in the present day.