The Birchall Road allotment site is enclosed by houses on all sides and is on a sloped aspect. As the modern satellite picture shows, the site (outlined in green) can be accessed from 3 sides, with an access path going through the middle of the site. The path from Birchall Road is not an official public right of way but has been used by allotment holders for many years, so is now accepted as such.

Birchall Road allotments used to be waste land where rubbish and builders rubble was dumped. However, In 1931 H&DAA agreed with Bishop Monk’s Horfield Trust, the landowner, that it could develop a former rubbish dump next to Birchall Road into allotment land. The Association spent £100 in converting it into cultivatable land. By 1933 land that previously had been covered with builders’ refuse was now fully occupied by plotholders. In the annual report it was suggested that anyone who remembers its former condition is invited to pay a visit to the field and we guarantee that they will receive the surprise of their lives.

The dangers from enemy bombs were brought home when a stray bomb landed on the Birchall Road allotments during the war. The bomb crater remained for some time after the war and that area is still known by current plotholders there. See Figure 3 (below) where the bomb crater can be seen.

In Oct 1953 Bristol Corporation bought this land from Bishop Monk’s Trust for a sum of £525. H&DAA then rented the allotments from the Corporation on a long lease. The site is just under 3¼ acres in size.

In 1989 a sizeable section of the Birchall Road allotments was closed for a huge new water tank to be installed by Wessex Water. This new tank acts as a flood relief scheme should the culverted stream parallel to Cranbrook Road be threatened with overflowing. This area of the site was closed for over 2 years.

In recent years intrepid Birchall Road plotholders have been recovering land that was previously unusable and developing it into workable plots, much in the same way that their predecessors did in the 1930s! 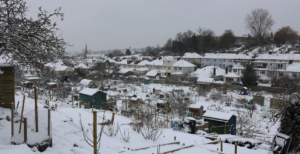 Birchall Road allotments in the snow, 2018