Graham’s field is the northernmost of the H&DAA sites, and is located just off Gloucester Road in Horfield. As the modern satellite image below shows, the site (outline in green) is split across two sites, separated by Wessex Avenue. However, the site used to be much larger when it was first used by H&DAA.

This allotment site was formerly owned by the Horfield Court Estate and managed by Farmer William Graham. H&DAA started using it for allotments in 1921. In an early 20th Century aerial Photo of the site, Horfield Barracks and its Garrison Church can be clearly seen at the top of the photo. Filton Road is to the left and the large expanse of allotments can be seen. There is no Wessex Avenue as this has yet to be built, the allotments cover the whole site. Hedges can be seen in the allotment site, as shown in the 1843 tithe map and earlier OS maps.

An old plot map of Graham’s Field shows 230 plots marked out. Most of which are sized at ten perch. It also shows the old hedge boundaries which still existed at that time. The original size of the allotment site was around 16 acres. Sections of land had to be given up in the 1920s and 30s for houses and roads to be built. In September 1936 the Bristol Corporation bought the remainder of Graham’s Fields from the Horfield Court Estate for a sum of £510. The area was just under 2½ acres and the site was named Wessex Avenue after the road that had been built through it in the mid 1930s. The official council map shows the allotment site marked in pink.

The Garrison Church still remains (although not now used as a church), but the Horfield Barrack was closed and demolished in 1966 and replaced by a mix of industrial buildings and housing development. 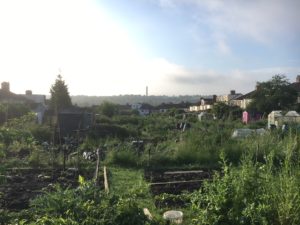 The two parts of Grahams Field either side of Wessex Avenue are now called Highbury and Telecoms. On a clear day there is view of Purdown.