Campaigning work by the H&DAA Committee has always been an important part of its remit. In the early days the problems was security of tenure. There was often a threat of eviction from the land leased from private landlords. H&DAA worked closely with Bristol Corporation to ensure suitable land could be identified and acquired.
Lobbying of MPs was another activity to get Allotment Bills through Parliament.
When unemployment was high in the 1930s, H&DAA helped with plots and seeds.

Much later, in the 1980s, H&DAA  was still campaigning in other ways by lobbying the government to retain allotments rights in legislation; helping the unemployed to get allotments; and by working with the Probation Service to get work done on the allotments by offenders under Community Service

In the early days the issues was about acquiring land to use for allotments. In the 1920s members of the H&DAA would go to National Allotments Conferences to speak on the insecurity of tenure and encouraged associations to get their land on longer leases, even if it meant an increase in the rent paid to the landlord. Many of the Committee were also working on behalf of the Agricultural Organisation Society, which helped allotment associations to become better organised, and fight for their rights.

Other H&DAA committee members were on the local Bristol and District Small Holdings and Allotment Federation Ltd. and also the Bristol Civic Allotments Committee. They were able to argue their case with the local councillors and Corporation officials and make sure that the opinion of the local community was heard. An example of this was in June 1919 when H&DAA was asked to give up the Buffalo Bill’s Field allotment site.  A public meeting was organised where feelings against the eviction ran strong. The result was that part of the land was still being used up to 1926.

In 1922 the government drafted a new Allotments bill which threatened to reduce the security of tenure for allotment land. Members of the H&DAA committee were prominent in working with the regional Allotments Federation and local Allotments Associations to review the bill. Feedback was sent to the local MPs and a delegation went to Parliament to meet and lobby the select committee of MPs.

In the early 1930s the Government had launched a scheme, called the Unemployed Assistance Scheme, to help the unemployed in the cultivation of allotments by offering subsidised prices for packets of seeds, seed potatoes, tools and fertiliser. H&DAA was among the associations who helped to operate the scheme. They vetted people to ensure they were bona-fide unemployed, collected money and then purchased and distributed the seeds, etc. to people accepted into the scheme. They even offered plots at reduced rent to the uneployed.

In 1980, the government were drafting a new Allotments Bill. There was great concern that the government intended to do away with the parts of the 1925 Allotment Act which protects statutory allotment land. The H&DAA Committee, working with the Bristol Allotment Committee, local MP William Waldegrave, Friends of the Earth and others, lobbied the Secretary of State for the Environment and got the Act changed so that statutory allotments were kept. H&DAA was given a special mention in a speech at the 1980 National Society of Allotments & Gardens Conference to recognise the efforts it made.

The H&DAA Chairman, Arthur Clark, appeared in the local press in 1982, appealing to the unemployed to get an allotment. The cost for the unemployed was as low as £6 a year but the savings on food bill could be up to £400 a year. There were plenty of empty plots around Bristol as demand had tailed off once the BBC grow-your-own comedy programme, ‘The Good Life’, had gone off the air. 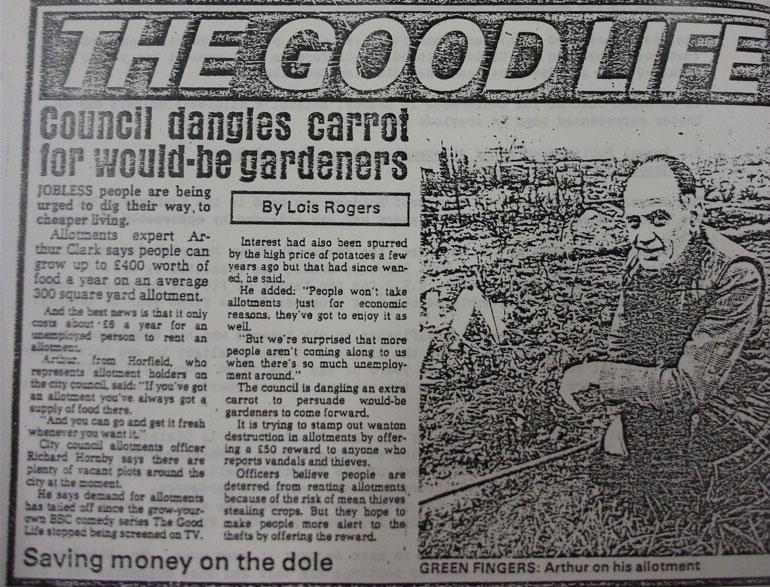 In 1983, another local initiative was set up by Arthur Clark as H&DAA chairman. He contacted the Avon Probation Service which supervises community service work which is ordered by the courts as a means of punishment. He arranged to have work parties of offenders operating under supervision to perform such tasks as hedge-clearing and fence installation. This community service work parties continued for some years and were a familiar site during the 1980s. (This work was to carry on until 2000 when the Probation Service pulled out of the arrangement.) 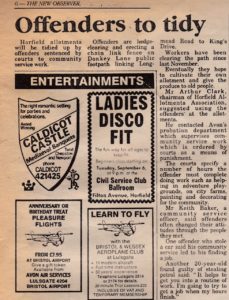