A sad and rather macabre sight was to be seen on St. Agnes Field in the Golden Hill site last week. A dead badger was found on one of the paths between plots. This badger, which appeared fully grown, had no obvious signs of how it had died. 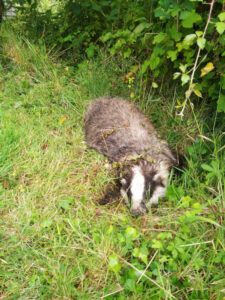 Although plotholders had known for some time that we had badgers (at least one anyway) visiting our site, it is never pleasant to see the demise of wildlife and certainly not a fine beast such as this.

However, those of us who grow sweetcorn will be breathing a mighty sigh of relief as the sweetcorn on our plots was just ripening and  we know what devastation Mr Badger can bring to a crop of juicy sweetcorn.