After the inspiring wildlife talk at the recent AGM, I decided to look at my allotment on Birchall Field in a new light. Most of the wildlife I encounter did not get a mention in the talk: the dead rat on a raised bed; the mice infestation in my shed; the afternoon visit from a fox who leaves an unsavoury pile behind; the badger excavations (more of that later).

I do try to look after wildlife .  I have an empty hedgehog house which I think is owned by a foreign investor as it lies uninhabited year on year. I also have a wood pile which looks rather ugly and I am not sure what succour it offers. Apart from that I see a pair of magpies, a few sparrows and a robin appears from nowhere when I dig the ground.

So this week was rather special.  I saw a slow worm, maybe two. I haven’t seen ones for years and was very glad they are 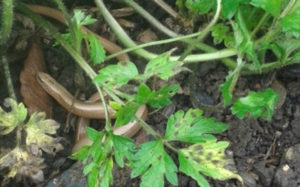 still around. It means I must leave my potato row a bit short but who cares. It seems that as soon as you leave a sheet of plastic or similar a slow worm will hide underneath.  It is a reminder not to cultivate all your plot.

The other sighting was not the creature itself but telltale evidence: the diggings of a badger.  Opinion on the allotment seems divided as to whether there are any badgers still.  Some holders seem surprised that there ever were any.  I have been left in no doubt. They have always enjoyed plot number 39.  My worms are the juiciest. This line of beetroot seedlings look good, let’s dig them up.  Broad beans? who needs them, dig them up. This woodchip path hides a snack, dig it up. I have sometimes been honoured with the siting of the badger toilet where my allotment is chosen for heap upon heap ….. that’s enough information.

If it is not a badger what else could it be? Other suspects could be a fox, a dog, a bionic rat.  Has anyone spotted a badger recently or have any other ideas?

Here is some more evidence of badgers on Birchall Road – holes in the bank on the boundary of the allotments – but these may have been made some time ago. 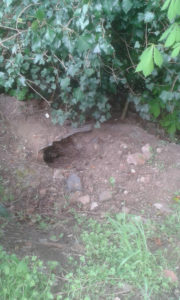 Read more about wildlife on the allotments.