After the snow of March, the traditional April showers turned into more of a deluge. Fairly steady rain fell for a number of days and plots became saturated with water. It was suggested that Bishopston Spring Water might be a good source of additional revenue for the allotments!    See Jobs for April. 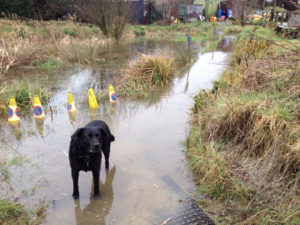 Even the Golden Hill pond, which welcomes rainfall, was seen to be overflowing as this photo shows. The path besides the pond was totally covered in water. However, certain residents didn’t mind getting their feet wet.