A racing pigeon, nicknamed Gormless, has made its home in the Golden Hill Community Garden. He managed to get into the balehouse this week and refused all enticement to leave, staying inside the balehouse overnight. 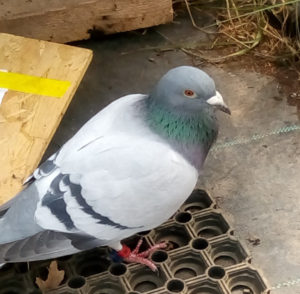 He was finally persuaded to leave the premises by the combined efforts of Pete and Lucy V brandishing a rake and brush respectively and with the able assistance of Chloe the Labrador who barked continuously at the pigeon.

However, two hours later Gormless was back and is now following Pete around the site as fast as his little pigeon toes allow.