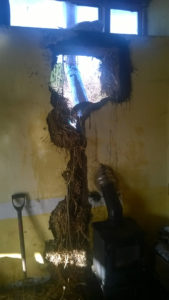 A house full of acrid smoke greeted us on the morning of 12th January when we opened the door of the Balehouse on the Golden Hill site. On further inspection it became apparent that the straw behind the wood-burning stove had ignited and was smouldering away. As the plaster on the wall was peeled away a full-blown fire erupted. Fortunately, Pete Clee and friends were on hand to manfully use watering cans to dampen down the offending straw which had spontaneously combusted.

Unfortunately by the time the fire had been put out there was a big hole in the wall of the Balehouse, a pile of soggy straw and plaster on the floor, and a horrible smell!. This photo shows the aftermath before Pete put a temporary fix over the hole. The good news is that the Balehouse is still operational, although the stove is not in use and a temporary radiator is keeping the space warm for the many groups that use it during the week.

Everyone agreed that it could have been a whole lot worse and are now looking forward to it being repaired. It still smells though!