This is one plotholder’s account of how they managed to outfox the badgers to grow sweetcorn successfully!

It’s been a matter of frustration for sweetcorn growers at the Golden Hill site for several years now.  Just as your sweetcorn, high as the elephant’s eye, is coming to gorgeous ripeness you arrive at your plot to a scene of devastation, the plants flattened and all the cobs eaten by something; the badgers have struck!

Well, the good news is that they can be beaten.  This year here at Davies plot 12 we grew sweetcorn with a successful barrier to badger attack, and here’s how: 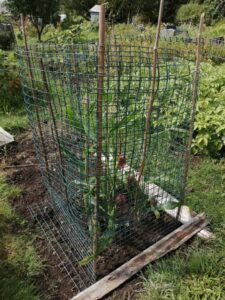 We built a cage around the base of the plants using the wire mesh shelves of long-defunct plastic growhouses, and a second layer above using pea support mesh to reach a height of about 4 feet (see first picture).  All this tied to stout canes at each corner and all overlapping edges well tied to eliminate any gaps that could be jumped or crawled through.

The key point, learned from our experience in 2020, was to bury the wire shelves about 6 inches into the ground.  This was learned the hard way from the mk1 version, where just as we were feeling confident and harvest approached, the badgers worked out that all they had to do was burrow underneath.  Burrow? Badgers? Who’d have thought it!

As you can hopefully see from the second picture, some attempt was made this year to burrow but was unsuccessful, so we presume they were put off by the buried cage.  But just in case, we had also laid more mesh, planks or whatever came to hand flat around the outside as discouragement too although the badger had clearly tried to get under this.

This was reassuring in a way, because it showed that badgers were still active, but were repelled.  For a while we feared our experiment would be invalidated because the body of a badger was found, and rumours abounded that it had been the sole culprit. This was not the case, as we found this attempt after that.

We only grew 4 plants this year to avoid waste if the experiment failed, but now feel confident enough to grow a bigger crop.  It probably doesn’t matter what materials you re-purpose to create barriers so long as they are well-secured to eliminate any gaps and sunk into the ground all round the crop.  All we have to cope with now is indifferent ripening weather in August, but we can’t do anything about that!