Bindweed is a perennial weed that can be a problem on the allotment as it grows in all conditions and is aggressive and persistent.  There are two types of bindweed commonly found on the allotment. 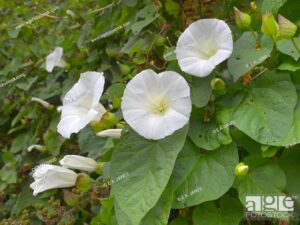 Hedge bindweed or Bellbind, (Calystegia sepium) – is a fast-growing perennial, vining plant which grows from both seeds and roots. In one year, its stems can reach several metres high while its roots can grow well over a metre. It is important to remove the flowers before they set seed. However, bindweed can also grow easily from underground roots called rhizomes. 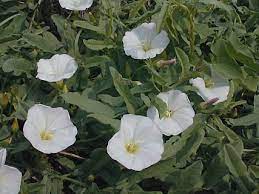 Field bindweed (Convolvulus arvensis) – is a weaker-stemmed plant, with smaller white or pink trumpet-shaped flowers, but otherwise similar in appearance to hedge bindweed. Similarly, it is not easy to remove as it has a perennial root system. The roots are usually white and brittle and, if broken, are able to regenerate from the smallest sections

Bindweed is a twining plant that wraps itself around anything in order to reach the sunlight. Once it finds sunshine, it sends out large, white, trumpeting blooms from June to October. If left unchecked, it will out-compete even large shrubs and small trees for any available light. Creating a rope of numerous stems twisted together, it binds, weakens and eventually destroys its host plants. This can all happen within just one season.

Field bindweed tends to spread along the ground as well as twine around plants. However, it grows very quickly and can take nutrients from the soil as well as smother other plants.  Established colonies of both forms of bindweed can spread outwards by 2m (6½ft) or more in a single season.

Controlling Bindweed
Bindweed is difficult to eradicate entirely as its roots extend deep into the soil. However the main methods of organic control are:

It is possible to kill bindweed with a systemic weedkiller such as glyphosphate, but this is not encouraged on our allotment sites.

WARNING: Bindweed waste should not be composted as it is most unlikely the heat will be sufficient to destroy it and it can even continue to grow inside your compost