There are some mysterious goings-on at the Golden HIll site. Many plotholders have reported damage to their sweetcorn crops this month. While it’s not unusual to have the tops of sweetcorn nibbled when they become ripe (usually due to birds), this has been far more drastic.

Many sweetcorn plants have been knocked flat to the ground and the cobs exposed and eaten, crossways much as we would do when eating sweetcorn cobs at home. As can be seen from the images the cobs are well and truly destroyed. 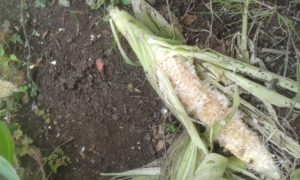 This damage has been seen on plots in Davies and St Agnes Fields, and there may be other fields affected on the Golden Hill site. Pete Clee, our esteemed Vice Chair and Site Rep, suspects badgers. Tim Foster, plotholder and organic gardening teacher, has suffered such damage to 4 of his sweetcorn plants. He also believes that such damage is unlikely to be inflicted by foxes or birds.

Although we know there are badgers on other allotments in Bristol (including our own Birchall Road site), there have been no confirmed sightings of badgers at Golden Hill for a number of years.

Have you seen any badgers or had crops affected by badgers? If so let us know through the Contacts Page of the Website.