A new set of solar panels has been fitted to the Balehouse (aka EcoHouse) at our Golden Hill allotments. This replaces the previous panels which were blown down from the “Tower of Power” in the winter storms of early 2020. 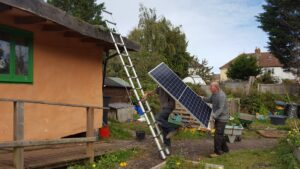 Pete can be seen helping the installer fit one of the four panels on to the roof of the Balehouse.

As well as new solar panels, the whole electrical system that is fed by the panels has been upgraded and enhanced. We can now fully power the water pump that pumps water from the bottom of the site up to the top of the hill to the holding tanks that in turn feed the troughs across the Golden Hill site.

In addition to this the solar panels top up the batteries that power the lights and sockets in the Balehouse so that we can use it at night and also boil the kettle for a brew-up!